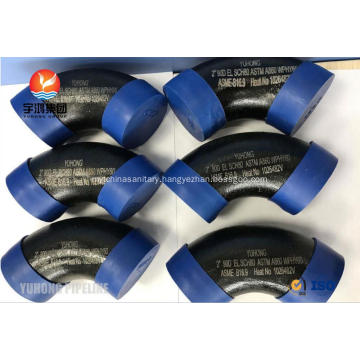 With the rapid expansion in the global trade, standardization of various products has become an essential requirement. The standards given to various products significantly contributes towards increasing international trade which in turn bridges the quality gap between the manufacturers, producers and buyers of different nations. In Pipe Fittings as well, standards play a vital role. The manufacture and installation of pipe fittings is tightly regulated by various standards and codes.
The integrity of pipe fittings and Flanges in the piping system depends on various principles used in design, construction and maintenance of the entire system. The components of pipe fittings are made in different materials, in a variety of types and sizes and hence should be manufactured according to common national standards or according to manufacturers' proprietary item. Some manufacturers also use their own internal piping standards based upon national and industry sector standards.

Difference between [Standard" and [Codes":
Piping codes imply the requirements of design, fabrication, use of materials, tests and inspection of various pipe and piping system. It has a limited jurisdiction defined by the code. On the other hand, piping standards imply application design and construction rules and requirements for pipe fittings like adapters, flanges, sleeves, elbows, union, tees, Valves etc. Like a code, it also has a limited scope defined by the standard.
Factors affecting standards:
[Standards" on pipe fittings are based on certain factors like as follows: Yuhong Group has gained rich experience in Pipes, Fittings, Flanges, Valves, Structural steel, Coils and Plates in past seven years. In a short span of time, Yuhong Group has marked its global presence in more than 30 countries. We have successfully implemented the orders of Cross Country Pipelines for our valuable customers. In addition, we have also developed a huge network of contacts and strategic alliances with most important manufacturers an stockists around the world.

It allows us to offer highly competitive solutions with certified quality, complying with high standard of today's industry. In the supply chain of Yuhong Group,Stainless Steel Pipe and Tube, which are produces by our factories : Zhejiang Yuhongwell Steel Co.,Ltd , Zhejiang Zhongwu Tube Manufacturing Co.,Ltd , Jiangsu New Zhongzhou Special Alloy Materials Co.,Ltd etc. And all of other products' suppliers are approved by our QC department. About Stainless Steel Fittings & Flanges, our suppliers are approved by PED, AD2000, DNV, ABS, TS, GL, LR, KR, GOST, NK, etc. Similarly in Carbon steel Pipe/tube/fitting, our suppliers are approved by API5L, API 5CT,API 5D, PED etc. When we place the order, it is our practice to follow the order start from raw material. After getting the material ready, our QC people make strict inspection again before loading the material. We will follow the whole processing of producing, marking ,packing and inspection before deliver to customer.

Email to this supplier